Out of Ethiopia, Educated in Israel, and Back to Africa to Help
http://www.tadias.com/2009/04/06/out-of-ethiopia-educated-in-israel-and-back-to-africa-to-assist-rwanda-orphans/
Published by News Room April 6th, 2009 in History and News & Hot Shots. 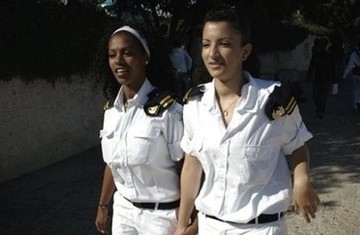 Above: Israeli navy soldiers walk towards a prayer ceremony
held on the Ethiopian Jews’ Sigd holiday on a hill overlooking
Jerusalem. The prayer is performed by Ethiopian Jews every
year to celebrate their community’s connection and
commitment to Israel. About 80,000 Ethiopian Jews live in
Israel, many of them came in massive Israeli airlifts during
times of crisis in Ethiopia in 1984 and 1991. (AP)

New York (Tadias) - Today Ethiopian Jews who were rescued from Africa during Operation Moses in 1984 and subsequently educated in Israel, are returning to Africa to help educate orphans who survived the genocide in Rwanda. Is this the start of a unique new stage in the history of the Jews of Ethiopia?

Just 35 years ago fewer than 200 Ethiopian Jews were residents of Israel. Then, in 1974, the American Association for Ethiopian Jews (AAEJ) began its grassroots efforts to rescue and bring to Israel those who were suffering in Africa. Could we ever imagine that by 2009 over 100,000 Ethiopian Jews would become Israeli citizens?

It is good to know that we helped fulfill Hillel’s proverb of “To save a soul, is to save a nation.” AAEJ and Isreali rescues from the Sudan refugee camps between 1979 and 1984-5 began the saga; then Operations Solomon and Sheba brought close to 10,000 Ethiopian Jews to Israel. The year 1991 saw the culmination of these heroic rescue campaigns in the dramatic airlift of Operation Solomon when 14,235 Ethiopian Jews were brought to safety. Thus, Israel in partnership with the AAEJ and other activists, and the U.S.A., did actually save a nation. (See Black Jews, Jews and other Heroes: How Grassroots Activism Led to the Rescue of the Ethiopian Jews, by Howard Lenhoff, Gefen, Jerusalem, 2007.)

As presidents of the American Association for Ethiopian Jews between 1978 and 1993, when we disbanded, we continue to take pride in the fruits of that mission today. Not only are the Ethiopian Jews living as free people in Israel, but their successes have continuously inspired and enriched the lives of tens of thousands of Israeli and American Jews who supported their rescue and adjustment in Israel.

Now we are thrilled to see the Ethiopian Jews bringing something else quite special to further enrich the multi-cultural nature of Israeli society and the status of Israel among the nations of the world: The Beta Yisrael are becoming an essential link in giving hope for a new life to orphans in Rwanda!

The JTA has already reported news of the Agahozo Shalom Youth Village presently being constructed by the American Jewish Joint Distribution Committee (JDC) in Rwamagana, Rwanda. The village is modeled after the Youth Aliyah Village of Yemin Orde, which was started to assist orphans from the Holocaust, and which played a major role in assisting the Ethiopian orphans, especially those who had lost their parents in the refugee camps of Sudan just before Operation Moses twenty-five years ago.

Why are we excited? Because nearly a dozen Ethiopian Israeli volunteers will be participating in the training of the Rwandans as resident teachers and staff of the orphans at the Agahozo Shalom Youth Village. All of these volunteers are Ethiopian Jews who escaped the poverty and wars of Ethiopia to become Israelis. Now they are returning to offer humanitarian assistance on behalf of Israel to save another nation in Africa.

The Israeli staff person serving as Deputy Director of Informal Education is the well-educated Ethiopian Jew, Shimon Solomon. He is assisted by a former Ethiopian paratrooper and animal husbandry expert, Dror Neguissi, who will serve as coordinator for the Ethiopian Israelis who will be volunteering at the village over the course of the next year.

The idea for the project was conceived in November 2005 and by January of this year 18 housing units had been built, each of them home for 16 Rwandan orphans. In March, during a field visit by the JDC, a remarkable episode took place. Will Recant, former Executive Director of the AAEJ, and now an Assistant Executive Vice President at JDC and the acting JDC Director on this project, observed a most beautiful and engaging exchange when Dror Neguissi went from house to house with his laptop to share with for the Rwanda orphans a PowerPoint illustrating his personal journey from Ethiopia to Israel. First there were photographs illustrating life as an Ethiopian Jew growing up in a typical village in rural Africa. Next he showed photographs of the trek through the Sudan and the refugee camps where thousands of Ethiopian Jews lost their lives. He concluded with photos of the Beta Yisrael orphans at Yemin Orde and in Israel.

The Rwandan students were surprised and moved by the presentation. They identified with Dror, who like them, had suffered and lost family in Africa, and like them, was African. The story gave them hope; maybe they too could go on to prosper.

Just think: What if Israel were to train many more of the Ethiopian Jews, to form an Israeli Peace Corps to educate orphans of Rwanda and of other African countries who are trying to survive the bloodshed, disease, and famines which plague them?

The journey of these Ethiopian volunteers is iconic; they’ve traveled out of Ethiopia, became educated in Israel, and returned back to Africa to help their African brethren. Thirty five years ago American Jews were campaigning for the rescue from the squalid refugee camps of the Sudan of the Ethiopian Jews including those who are now volunteers in Rwanda. Today we pray for Israel to train and send more of its Ethiopian Jews to help the destitute orphans of Africa.