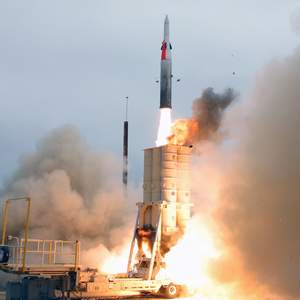 Diagram showing stages of missile interception by the Arrow ATBM System. The picture shows a hostile missile trajectory and that of the Black Sparrow air-launched target missile used in firing tests.

REMARKABLE LADIES WHO TERRIFY THE MULLAHS - By AMIR TAHERI - NEW YORK POST : For months, the state-owned media in the Islamic Republic in Iran has been whipping up frenzy about alleged plots to topple the regime. This was supposed to happen through a "velvet revolution," a "Freemason conspiracy," or "soft overthrow."

Last week, that frenzy found a new face: that of Roxana Saberi, a 31-year old former Miss North Dakota who has been in Tehran for years, working on and off as a reporter for Western media. Originally arrested on a charge of lacking a labor permit, she soon was transformed into a Mata Hari figure, a devious "spy" helping the American "Great Satan" undermine the world's first "truly Islamic system" since the Prophet's days in the 7th century. Last week a kangaroo court sentenced her to eight years in Tehran's dreaded Evin Prison.

Saberi is an ideal face for the sinister conspiracy campaign that President Mahmoud Ahmadinejad regards as essential to ensure his re-election in June.

To start with, Saberi is both an insider and an outsider. Her father is an Iranian who has lived in the United States since the revolution. Her mother is Japanese. She herself was born an American but was recently engaged to marry Iranian filmmaker Bahman Ghobadi.

Saberi is also a reporter, a profession the Islamist regime in Tehran hates. Since the creation of the Islamic Republic, by some counts, more than half of all Iranian journalists have spent some time in prison. According to Shamsul Waezin, himself a pro-regime journalist for years before joining the opposition, going to prison is part of a reporter's ordinary routine.

Next, and perhaps most significantly, Saberi is a woman.

The Khomeinist regime has always regarded women as one of its three worst enemies, the other two being Jews and Americans. The first demonstration against Khomeinism consisted entirely of women, and was held on International Women's Day, March 8, 1979 in Tehran, less than four weeks after the mullahs had seized power. Mrs. Shirin Ebadi, the first Iranian awarded the Nobel Peace Prize, has emerged as one of the most hated figures of the regime's loyal opposition. Since last January, scores of women fighting for women's rights have been arrested and sentenced to varying terms of imprisonment.

No one knows what might happen to Saberi. She may be used as a bargaining chip in talks with the Obama administration. Her release would enable Ahmadinejad to claim that he has responded to Obama's concessions without having to give way on bigger issues such as Tehran's nuclear project.

But if the fate of some women who shared some of her attributes is an indication, the prospect do not looks promising.

n Zahra Kazemi, an Iranian-born Canadian journalist and photographer was abducted, imprisoned, raped, and ultimately killed in Evin during the presidency of Hojat al-Islam Muhammad Khatami. In 2005, a committee of enquiry identified Kazemi's killers, but Khatami refused to arrest them and ordered that the case be closed.

n Zahra Bani-Yaqub, a medical doctor, was arrested in Hamdan, west of Tehran, and died after 24 hours of torture and possible rape.

n Ada Haratounian, an Armenian-Iranian has been sentenced to three years in jail on a charge of "researching the situation of Christians" in the Islamic Republic. She is held incommunicado and denied the urgent medical treatment she needs.

n Parnaz Azima, a reporter for Radio Free Europe's Persian program was arrested, and had her passport withdrawn for months before being allowed to leave the country.

n Roya Toluee, a mother of three, spent months in prison, and was subjected to torture and rape, before being allowed a furlough to visit her husband and children. She used the brief moment of freedom to escape to Turkey.

n Haleh Esfandiari, a scholar partly of Iranian origin at the Woodrow Wilson Center in Washington DC, spent months in prison in Tehran before being released after she was forced into making sensational televised confessions.

Some women are in prison because they have campaigned for an end to gender apartheid in the Islamic Republic. Among them are Shahla Entessari, Parvin Ardalan, Fariba Davoudi, Susan Tahmasbi and Azadeh Forghani, who organized a "one million signatures" campaign in support for women's demands last year.

According to the official statistic of the regime, published last week, over 60,000 women are in prison in Iran today, representing almost 10% of all inmates. Of these, some 30,000 are held on charges of anti-Islamic activities and/or violations of the notorious Islamic Dress Code passed by the Islamic Majlis (parliament) in April 2006.

While the Khomeinist regime has always targeted women, the crackdown against women activists intensified under President Khatami and has continued during Ahmadinejad's first term as president.

Islamic Prosecutor-General, Mohseni Ejehei, a mid-ranking mullah and Khatami's close friend, identified women as "the Trojan horse" of the regime's many enemies.

"The enemies of Islam hide behind women because they think we will be soft on women," Ejehi said in a speech in Tehran in March 2007. "They are mistaken. We don't forget that the Prophet himself said that where there is woman, there is danger."